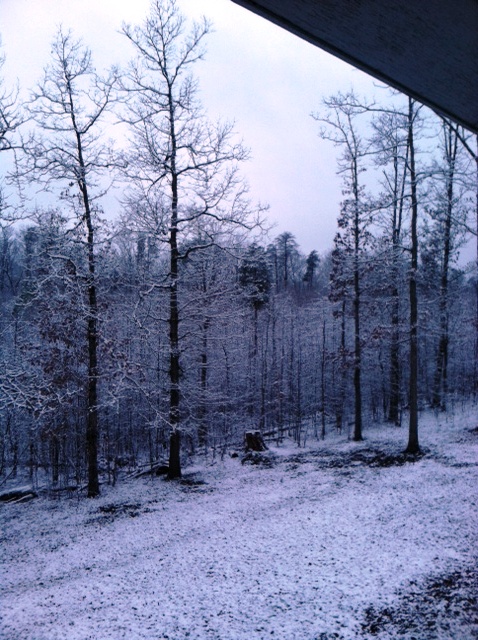 The weather in Virginia is at times squirrel-y. I don’t know in what other state you can experience freezing temperatures, tornadoes, snow and eighty degree highs in just the span of 2 weeks. Right now in honor of March we have skipped straight ahead to summer because that’s just how Virginia rolls and I’ve taken advantage of longer days and this warm turn by reinstating my evening walks. Glory.

If you came here looking for a coherent, seamless, put together post- I apologize- today is not the day. It’s 80 degrees and I’m eating soup. Like the weather patterns sometimes I make no sense… unless you realize the air condition is on and then suddenly soup becomes a quite logical choice.

Sometimes God works the same way putting just the right seemingly random events in our path until we step back and realize his greater purpose all along.

My misgivings arise from the fact that I search within to find how He will do what He says. My doubts spring form the depths of my own inferiority. ~ Oswald Chambers

A few weeks ago I had a revelation as I looked over past journal entries chronicling the same feelings over and over. And as my mind jumped on the bandwagon that I could never change, something inside me ignited and I realized how could I really make any lasting progress when I kept reminding myself in written word form of how I fail?

The bible tells us to forget the past and press on to what lies ahead. It tells us to recall His goodness and not relive our own shortcomings. In a flash, a light bulb went on and I considered sacrificing all those pages to a fiery death but I’m not really a fan of matches so I chose submitting and seeking, standing on and pouring in His promises instead.

I chose to pen prayers rather than chronicle the past.

If thou hast anything that perplexes thee, the simplest plan for thee will be, not to try to solve the difficulty but to seek direction from Heaven concerning it. ~  Charles Spurgeon

Suddenly, not only me but my prayers changed for the better. Instead of wrestling with myself- I’m finding it’s far better to wrestle with God for my blessing as Jacob did knowing that even if I come away limping, in my weakness I will be made into something stronger.

We may have as much of God as we will. Christ puts the key of the treasure-chamber into our hand, and bids us take all that we want. If a man is admitted into the bullion vault of a bank, and told to help himself, and comes out with one cent, whose fault is it that he is poor? Whose fault is it that Christian people generally have such scanty portions of the free riches of God?
–McLaren

Since slaying the written critic, I found I still had to combat the inner voice that constantly causes a ruckus in my soul so I decided instead of leaving my mind to it’s own devices I needed to start really listening to the word of God – both by reading it out loud and streaming sermons outside of Sunday mornings.

So we must listen very carefully to the truth we have heard or we may drift away from it. ~ Hebrews 2:1

Always a sucker for a southern accent, I started with Pastor Nick Holden– there hasn’t been a message yet that failed to impart some wisdom or confirming witness to my hungry soul…

Last weekend my mom and I made a rogue trip to the Christian bookstore in search of a wide margin, large print journaling bible… spoiler alert: I didn’t find one. So we did the next logical thing and perused the music section where I found this album by For King and Country. Music will always be my first love- my go-to art – for listening but there is something about the audible stripped down spoken word that strikes a different chord.

Because fixing our mind and and eyes are only effective if we’re tuning our ears to listen as well.

Suddenly I was seeing provision at every turn…

If He has promised to take care of you for eternity why would He not take care of your immediate need? Why would he not give you the manna you need to sustain your life right now? ~ Steve Farrar

In my travels this past week I watched the sun rise and set, discovered perfect tiny pine cones, and was surprised by geese, deer and a donkey… the donkey showed up as part of a petting zoo event I stumbled across. However I knew he was for me since I had been praying about having a more humble heart just steps before.

And as if all He was doing was waiting for me to ask, after one email that I didn’t think would lead to anything other than a polite answer to a wayward question regarding some website and marketing projects at church, suddenly we’ve been bolstered with the technical saavy and social media skills of another who is spurring us onto action. I marvel at the infusion of grace and help we needed showing up at just the right time. But I know it was part of His plan all along.

Last week our bible study examined the story of Moses’ death… How the Lord invited him up to the top of the mountain and showed him the whole of the promised land but Moses could not enter it.

In the next verse Moses died and the Lord buried him.

And it irked me.

But thankfully my annoyance was short lived.

The thought that Moses was needlessly punished and thereby failed to achieve entrance into the promised land paled in comparison to the fact that the Lord cared for him so deeply that not only did the Lord himself bury him but He immediately whisked him away to something greater- the eternal promised land.

Because God is always about the business of something better.

So in this meandering trail today I hope you’ll be encouraged by this:

And we know [with great confidence] that God [who is deeply concerned about us] causes all things to work together [as a plan] for good for those who love God, to those who are called according to His plan and purpose. ~ Romans 8:28

The desert times and the manna. The trails and the treasure within. The cold winter and the beauty of the Spring. Fights and triumphs. All in conjunction. All for a greater glory.

Linking up with some other lovely ladies today at:

14 thoughts on “Walking Towards Something Better”