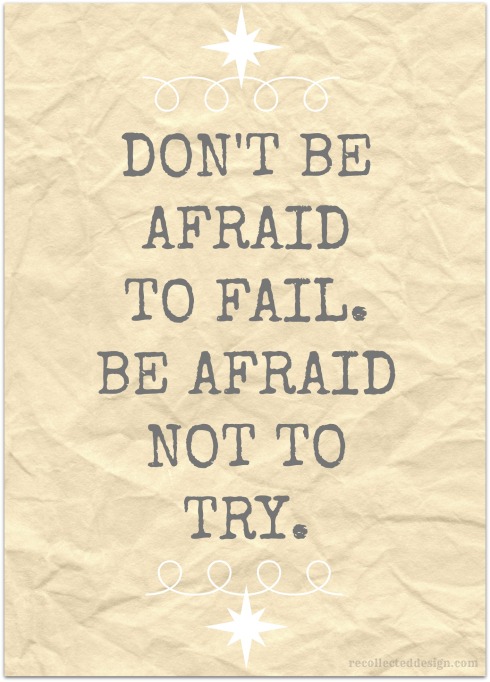 This quote brought to you by a good ol’ HGTV commercial… who knew they were so deep? As I sat on my couch Sunday night cutting words and pictures out of magazines to make a collage for my SS class (i am on a roll and totally in my artsy element as I do this …some things never change… more on the collages in a few…) I’ve got Salvage Dawgs playing in the background and I want to road trip to Roanoke so bad just to see their store and possibly catch a glimpse of Mike (because he makes me laugh and reminds me of my dad) But then I heard those words spoken on an ad… And it got me thinking…

All weekend, well probably all week, I’ve been struggling. I’m a lane switcher. I lack focus sometimes (there may be great evidence of that in this post in fact…!) and in my old age I’m finding I’m kind of a cliff jumper too. And I can let a pebble in my path become a mountain in my mind. It doesn’t help that I suffer from decision paralysis (this is genetic I’m told… my mama apologizes weekly for passing this trait on… haha) I’m also learning that I’m awesome with ideas but less than awesome with follow through sometimes. And I’m hard on my self- harder than anyone else around me. That inner perfectionist rears her head here so often. I’m inspired by so many great ideas, but so easily overwhelmed. And when I reach the overwhelmed point, too many decisions and too many setbacks, it’s easy to throw in the towel at slightest offense.

Case in point, when I encounter a situation like Saturday where I break four needles in a row in my sewing machine trying to finish a slipcover, I then commence to wail and moan “why did I think I could ever make it in the slip covering business. I must be kidding myself.” (I left out the less than encouraging words but you get the picture) And it’s at that point you will see the girl on the side of that cliff as she leaps off! {please send parachutes} It could be said someone needs a mental (or possibly physical) vacation… So many feelings, so little time…!

When your paper towels start talking to you:

You had better put on your listening ears…

It was said to me over the weekend sometimes we need to Melt Down to Move On… If you think of it as a process of refining- which God has us in everyday- it’s very true. You can’t become something changed until your imperfections are melted right on out of you… Hence the need for those paper towels… Moving on gets messy sometimes.

SO I perked up at that HGTV quote because it piggy-backed on an article I had read earlier about Barbara Corcoran from that show Shark Tank about how the most important quality she looks for in an entrepreneur is RESILIENCE… and immediately in my head I start singing “I’m rubber and you’re glue…♪♫♫….” And I realized I’ve been acting much more like a rock or petrified wood than rubber or anything having any pliability. I dance that 2-step straight to the edge and stubbornly cry:

Must it be all or nothing all the time? Am I being overly emotional for the situation? (Don’t answer that..) But what starts taking shape in my brain is that failing is an integral part of learning how to be resilient. If you don’t fail, how can you learn to try again?

{no matter how many times those nasty June bugs devour my rose bush, it keeps on blooming…it obviously doesn’t know what failure is…}

If I break a needle (and I will) so what. ‘Tis a small thing.There’s another waiting in the box (my husband keeps me supplied…apparently he noticed my track record because this problem has been on-going, I just hadn’t dealt with it yet–hmm, a topic for another day…!) You’re all probably familiar with the definition of insanity: Doing the same thing over and over expecting a different result… I hate to say it took me 4+ times, but I finally sat myself down long enough to resist the insanity threatening to set in and tried and figure out WHY it was happening–And you know what I found after following Sparkle’s sage advice of keeping calm?

PROBLEM>> too many layers of fabric + an unnaturally wide presser foot riding along the edge of the piping forcing the needle position to be dialed in too far to the left  = a needle prone to bind and hit the edge of the opening in the throat plate of the machine should the fabric layers give any resistance. SOLUTION>> buy a narrower presser foot.

Done. Ebay is my friend. I only hope this foot fits…

And as we were watching the Richmond NASCAR race Saturday night another thought was hammered home…. A driver who shall remain nameless but has the tendency to whine sometimes was heard on the radio doing his usual thing to his crew chief: the car is horrible, it won’t turn, it won’t go straight…etc. etc. (again I left out the less than encouraging words but you get the picture) And his crew chief – who sees the timing information, who sees the whole track, who sees the grand picture just says ok buddy I hear you but your laps are faster than the guy running in front of you and you’re due to pass him any minute. Even when things right in front of him looked sketchy and hard, he was still gaining ground. Just go fast and turn left. There was a bigger picture than what that driver could see. Same with us…

So back to the collage and my joy of cutting and pasting… the one thing I did complete this weekend:

{used as an example for my Youth SS folks to make their own collages about themselves…this one happens to be about Jesus…mine is forth coming…just couldn’t get enough…!}

By the way do you know how challenging it is to find Jesus in magazines? As I flipped page after page looking for Jesus, I was forced to get creative… hence the doves, lanterns, rocks and words extracted from lengthier titles that had nothing to do with our Lord at all…but somehow I made it work.

Sometimes you just gotta take the good you do find and string it together the best way you can.

SO this week I am savoring the good parts and throwing the fear of failure off the cliff instead of myself. I am keeping calm and I am keeping on.

What’s new with you my friends?